On May 3, 2017 the Department of Homeland Security released the most detailed files to date on the 1979-1983 Richard Kelly Smyth/Arnon Milchan/Benjamin Netanyahu krytron smuggling ring. The 100-page dossier(PDF) answers important questions about how highly sensitive US nuclear weapons technologies were smuggled out of the country in the early 1980s. The pages leave two key questions unanswered. The first is why Arnon Milchan was not indicted alongside his co-conspirator Richard Kelly Smyth. The second is why in 2016 Secretary of State John Kerry granted Milchan a long-term visa to reside in the United States even after career Department of State officials initially refused.

The files, originally scheduled to be declassified in the year 2037, reveal that on December 6, 1979 the Israeli Ministry of Defense suddenly developed a need “of the utmost importance” for sophisticated devices invented and manufactured by EG&G called “krytrons.” Krytrons required a munitions license for exportation since they can be used to initiate the precisely timed conventional detonations necessary to create the “symmetric implosion shockwave needed for nuclear weapons.” Israel, which had just successfully conducted a joint nuclear test with apartheid South Africa, may have needed the devices for hydrodynamic testing and building up to 200 nuclear weapons for its own use, as well as agreed-to sales to South Africa. Detonating circuits for a single nuclear device can use two, four, or more, krytrons. By 1987, it became known to the US Department of Defense that Israel also had a hydrogen bomb project underway which may have necessitated reliable triggering mechanisms. 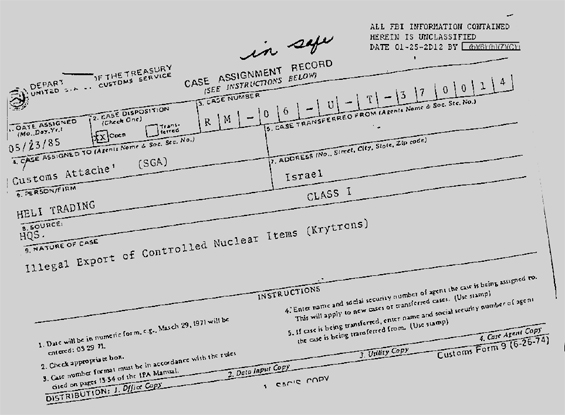 According to the file, Arnon Milchan’s Tel Aviv based import company HELI Trading received 60 percent of the gross profit on the transactions. According to a letter written by Richard Kelly Smyth, Benjamin Netanyahu was also an employee at Heli trading. According to an FBI file, Netanyahu met with Smyth in Israel several times during the smuggling operation. All the krytrons were delivered to the Israeli Ministry of Defense.

By early 1983, on the pretext of investigating a burglary at MILCO, a FBI special agent discovered the smuggling ruse. Smyth, perhaps expecting the forbearance the Department of Justice repeatedly extended to previous smugglers working for the Jewish Agency to arm the Hagenah in the 1940s, forthrightly told the special agent he was “bending the law” in shipping the vacuum tubes to Tel Aviv, and that he knew they required an export license. A May 13, 1983 search warrant yielded details of the smuggling affair which Smyth and Milchan had code-named “Pinto.”

A lightly-enough-redacted synopsis of the affair with biographical details makes it clear the Department of Justice knew Arnon Milchan was implicated. “At some time in 1979 [Arnon Milchan] and [Richard Smyth] entered into a conspiracy to illegally export certain U.S. Munitions List items, specifically, krytrons from the United States to the Republic of Israel without the required authorization of the United States Department of State.”

In August 19, 1985 diplomatic correspondence with US Customs, the Israeli Ministry of Defense confirmed that it was the end user of the krytrons and, without specifying what use they were actually put to, confirmed “the krytrons were not and will not be used for any nuclear program…” MOD gruffly offered to “deliver you any unused Krytrons in our possession.”

Smyth was indicted in 1985, but fled the US until apprehended and extradited from Malaga Spain in 2001. From jail, he reached out to Arnon Milchan for help, boasting  “I still feel young and vibrant at 72 years since I run a mile every day” and congratulating Milchan that “I was delighted to hear your former employee, Netanyahu, had become Prime Minister of Israel.” After his US felony conviction and a prison sentencing, Smyth gained early release claiming poor health and advanced age.

Arnon Milchan, who also initially fled the US in the mid-1980s, was never charged and remained free to produce motion pictures in California. In 2016, Milchan’s former employee Benjamin Netanyahu pressured then Secretary of State John Kerry to – against State Department wishes – issue Milchan a new long-term US resident visa. In Israel, Netanyahu is presently embroiled in a corruption probe that involves lavish gifts from Milchan.

In the United States, the reclusive Milchan continues uninterrupted work in Hollywood. In March, 2017 the US State Department claimed the negotiations and details surrounding the 2016 Milchan visa can never be publicly released due to “confidentially provisions of section 222(f) of the Immigration and Nationality Act.” (PDF)

Grant F. Smith is the director of the Institute for Research: Middle Eastern Policyin Washington and the author of the 2016 book, Big Israel: How Israel’s Lobby moves America. On September 2, 2015, he filed a lawsuit in federal court to disclose secret CIA intelligence aid to Israel.

Grant F. Smith is the author of the new book Divert! NUMEC, Zalman Shapiro and the diversion of U.S. weapons-grade uranium into the Israeli nuclear weapons program. He is director of the Institute for Research: Middle Eastern Policy in Washington, D.C.